Some say the days of broadcast TV are over, and that catch-up TV services have made the PVR unnecessary. These people have never missed the end of a six-episode whodunnit because the BBC has dropped it from iPlayer. They also underestimate the convenience and control of having a Freeview HD box, particularly if you’re not willing or able to splash out on a subscription TV package from Virgin or Sky.

You might be stuck with an old one with a slow, flaky interface, or that can’t handle HD channels or provide built-in catch-up TV. In that case, a new box could transform how – and how much – you enjoy your favourite programmes. While basic Freeview HD is still the entry-level option, you don’t have to pay a whole lot more to get a supercharged Freeview Play unit, which moves catch-up TV services into the regular electronic programme guide (EPG).

The same set-top boxes are also integrating streaming services such as Netflix and Amazon Prime Video , enabling you to switch from The Bridge on BBC to The Crown on Netflix without changing source or remote control. They’re easy to work with, too – all you need is a spare HDMI port on your TV and a cable to connect the two.

How to choose the best Freeview box for you

First, check that you actually need a Freeview box. If you’ve bought a TV within the past few years, there’s a good chance that it already has a Freeview receiver and may even have recording facilities if you connect an external hard drive into a free USB port.

If you’ve bought a TV within the past year or so, it might even have Freeview Play built-in. All the same, having a Freeview tuner doesn’t necessarily mean that you don’t want a Freeview HD set-top box; the EPG you have might be slow, ugly or unstable, or the tuner may struggle to deliver a decent HD picture or upscale SD content to HD. Even those TVs that support recording can often only record one channel at a time.

There may also be other options to get Freeview HD TV through your aerial. BT supplies customers for its BT TV services with a 4K-capable Freeview HD recorder, while TalkTalk has a choice of boxes for its own TalkTalk TV customers.

How much should I spend?

It depends on what you’re after. If you just want to watch Freeview HD channels, you can pick up a receiver for less than £30, though these tend to be old or sometimes discontinued products. Luckily, Freeview Play boxes have now come down a lot in price, so you’re looking at £50-100 for a much more capable box. For a recorder, prices start at around £100 and climb up to £250, depending on the hard drive capacity.

Do I need recording or catch-up TV?

There’s one line of thinking that recording is no longer a must-have feature in an age of catch-up TV. However, recording programmes keeps you in control; unless you’re short of hard disk space, you won’t find programmes suddenly disappearing from your set-top box when you’re halfway through a series, and you can keep a favourite programme or film on the box for years. Recorders also give you two or more receivers, enabling you to record two channels at once or watch one programme while recording another. Note that some receivers now include recording features, enabling you to record programmes from the EPG to an external hard disk.

Are there other features I should look for?

That’s not all. Freeview Play boxes also provide apps for streaming services, including YouTube, iPlayer, All 4 and Amazon Prime Video, though Now TV and Netflix support seem to have fallen off the menu in the last 12 months.

What’s more, Freeview Play has rolled out new features that recommend programmes from across different channels in a range of genres or find shows through a universal search. To use these features – and the catch-up services – you’ll need a connection to a wired or wireless network. Luckily, most now include built-in Wi-Fi.

What about resolution and connectivity?

It’s now virtually impossible to buy a Freeview box that doesn’t support Freeview HD broadcasts at a 1080i resolution over HDMI, so they’re perfect for Full HD 1080p TVs. We’re also seeing models that are designed to work at 4K resolutions, although there’s one big caveat here. Mainstream TV providers, including the BBC, have so far only run 4K programmes over internet streaming services, and that looks set to continue into the foreseeable future. 4K boxes are still useful for streaming 4K content from Netflix, YouTube or Amazon Prime Video, but you won’t be seeing other 4K channels at any time soon.

There’s bad news if you’re using an old SD TV; while you might be able to find an old Freeview box with an analogue SCART output, the vast majority have now gone wholesale for HDMI. Otherwise, digital optical or analogue stereo outputs can be useful if you want to connect your box directly to a soundbar or amplifier, although in most cases you’re better off having sound routed through the TV via HDMI along with the picture. Nearly all support basic Dolby Digital 5.1 surround sound, but a few also support the newer Dolby Atmos standard – though, again, this is only used by streaming services, not mainstream broadcasts.

READ NEXT: The best 4K HDR TVs you can buy

The best Freeview boxes to buy

Billed as a little box with a mighty punch, the Manhattan T1 is an extremely compact if basic Freeview HD receiver with all you need to watch HD and SD channels. It has an aerial input and loop output, an HDMI output and a single analogue AV output, which you can use with Manhattan’s adapter kit if you need to connect the T1 to an old SD TV.

Just don’t get too excited by the USB or Ethernet ports; the former only covers firmware updates while the latter works with a small number of minor internet TV channels. The important thing is that the T1 delivers decent HD pictures, complete with Dolby Digital surround sound, and it has a clear, well-designed EPG that isn’t painfully slow or unresponsive. It won’t give you recording or smart TV services, but it’s the simplest, cheapest way to get Freeview HD.

While it’s been superseded by the Humax Aura, the old FVP-5000T is still a formidable Freeview Play recorder. It has three HD tuners, enabling you to watch one channel while recording two or even – with a little multiplex magic – record up to four programmes simultaneously.

In fact, the FVP-5000T trumps its newer sibling on one account: it has built-in Netflix streaming where the Aura has no Netflix app. Beyond that, it still has a slick, intelligent EPG and a choice of 500GB or 1TB hard drives, giving you enough capacity to record up to 250 hours of HD programmes. Install the Humax Live TV iOS or Android app and you can also schedule recordings and set reminders from your phone, or stream live or recorded programmes to the smaller screen.

You can even stream media from the USB port or broadcast it back out using DLNA to other PCs and devices in the home. It’s no match for the Aura and a little slow by modern standards, but still a formidable, feature-packed recorder.

The Manhattan T3R takes everything that’s good about its T3 set-top box and adds dual-tuner recording capabilities. It’s a little larger than the T3, with a footprint closer to a modern Blu-ray player, but it shares a similar curvy design with just an understated blue status LED at the front. We’re also big fans of the remote control, with its chunky buttons and easy access to the major features.

Strengths and weaknesses are roughly the same as the T3. You get support for 4K video, but on only two sources – BBC iPlayer and YouTube. While the T3R has streaming capabilities there’s no onboard support for either Amazon Prime Video or Netflix. However, the user interface is great, with useful features such as a global smart search and watchlists, and image quality is impressive, with the T3R even upscaling standard-definition video in style. Plus with this one you can pause and rewind live TV or record single programmes or whole series – the T3R will suggest alternatives when programmes clash or HD broadcasts when they are available, making the whole experience fuss-free.

With nippier performance than many older Freeview Play recorders, the T3R gives you a premium Freeview Play experience without the matching price-tag. If you’re not bothered about the lacklustre streaming lineup, this is the box to buy.

Humax had its work cut out to beat the FVP-5000T, but the Aura is – in nearly every respect – even better. It’s a speedy, 4K-capable box built around Google’s Android TV OS and combining 4K streaming services with the best of Freeview Play. It comes with a voice-enabled remote and Google Assistant voice control, supports HDR10, HLG, DTS-X and Dolby Atmos, and has one of the best UIs and TV Guides around. There’s also Bluetooth 4.2 connectivity for hooking up a soundbar or a pair of Bluetooth headphones, and recording and playback quality are fantastic. As with the FVP-5000T, you can record up to four channels simultaneously.

Recent updates have fixed some of the inconsistencies in the interface, with improved recommendations, featured content and now-and-next guides. What’s more, Humax is improving support for high-end audio standards, including DTS HD and Dolby TrueHD, along with its video upscaling. And while there’s still no support for Netflix, Humax has added Apple TV, while you can watch Now and some other streaming services using the Aura’s built-in Chromecast features. It can even stream Google Stadia games. This is a great Freeview Play meets Android TV box that just keeps getting better – and the closest Freeview gets to the kind of seamless, all-in-one experience delivered by Sky or Virgin’s TV platforms. 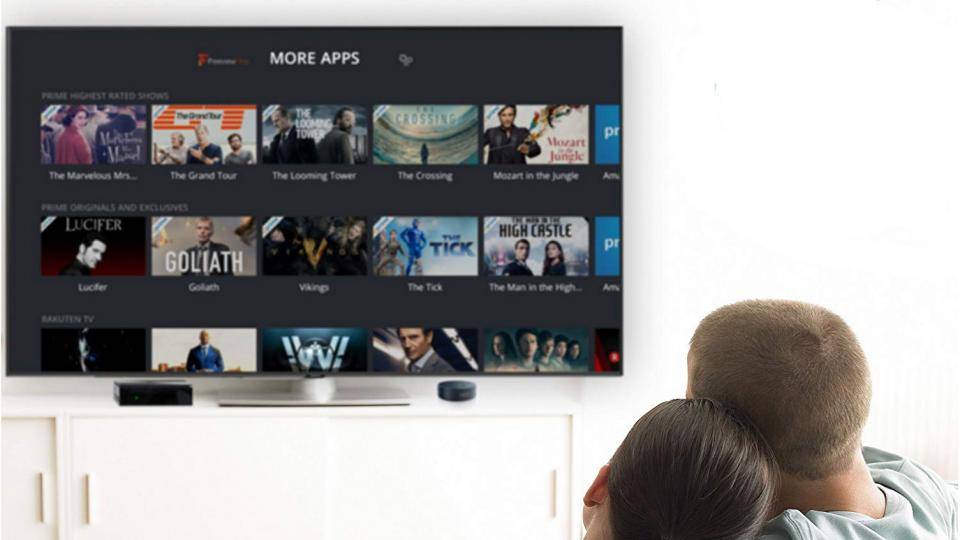